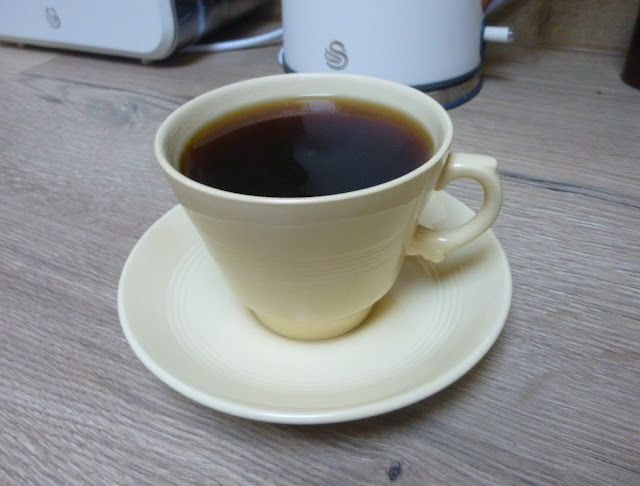 Now this is getting silly ... after taking this photo and drinking this coffee I DEFINITELY took a photo of my bowl of porridge and its accompanying apple, but it has vanished!!
You will have to imagine a green Beryl ware bowl filled right to the brim with porridge... yes, I made my usual portion forgeting that the bowl was smaller ...  and sitting just behind it was a red apple.
There that was breakfast, doesn't it look lovely.  😁 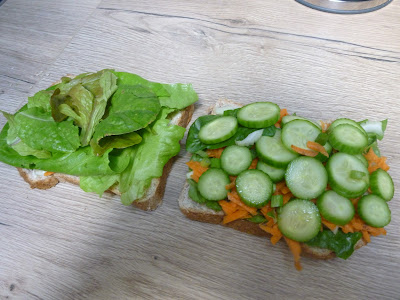 Thankfully my camera did not delete the photos of my lunch.

I took my inspiration from this recipe and started with a grated carrot, then I went off on a tangent and replaced cabbage with leaves and cucumber from the Victory Garden, a single spring onion finely sliced and the merest hint of a bit of spread to stick everything to the bread. 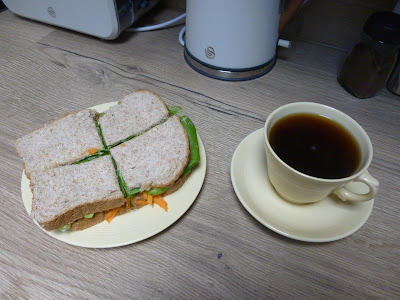 Oh, it was tasty, very fall-y apart-y but tasty. 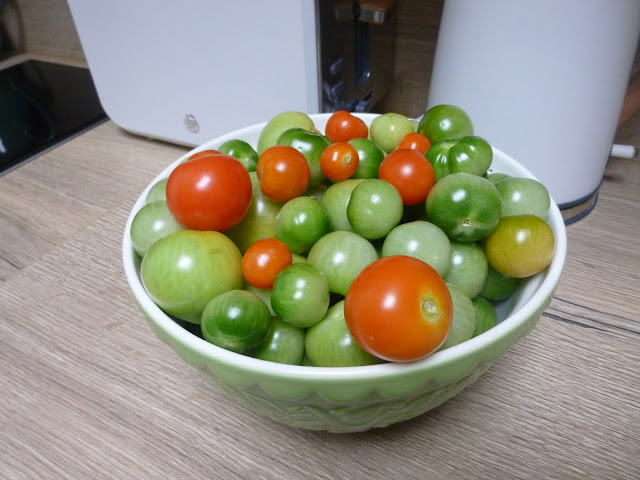 While I was out in the garden gathering in lunch, I picked all the remaining usable tomatoes and brought them in.  Some might ripen a bit more with the help of the few red ones I already had, but the majority will be turned into some Green Tomato Chutney to help fill my store-cupboard for winter. 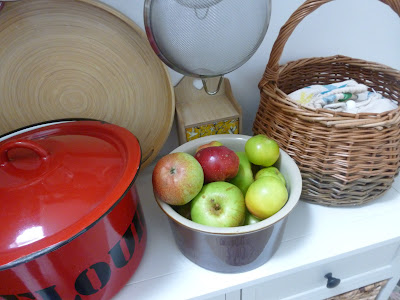 I decided the next job was to process all the scrumped apples. 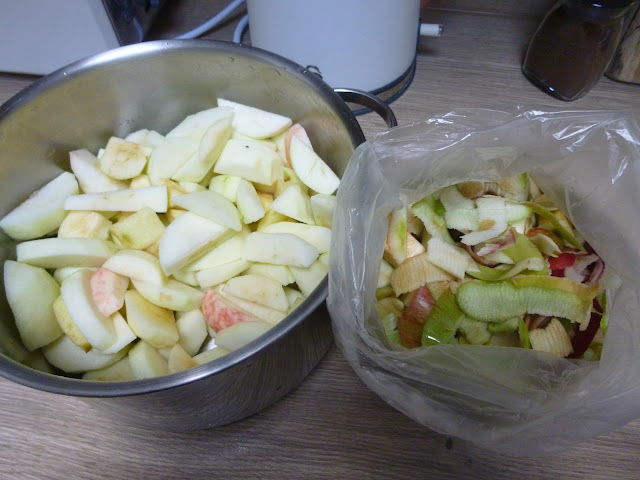 It didn't take long.  All the cores and peels were put into a bag and popped into the freezer, when I have more time I will make a batch of Compost Jelly, a nice mild fruity jelly/jam that's made from all the odds and ends of fruit and peelings strained so that none of the pips or bits get through.
More food for the winter stores. 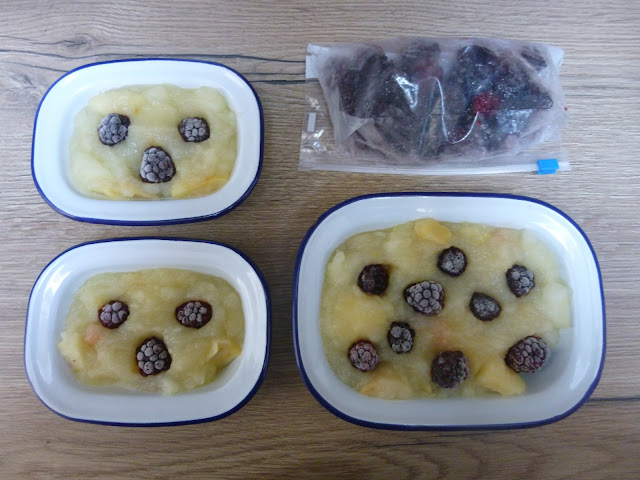 Once stewed into a glorious mushy, lumpy mess I filled one large and two small enamel pie dishes and then decided to put in some of the blackberries from the freezer into the hot apples. 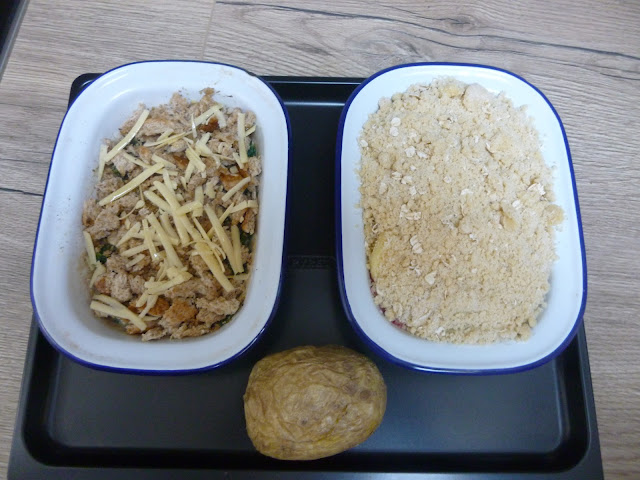 For my evening meal I had chosen another recipe from the Food Facts book, this time a healthy sounding Spinach au Gratin, I decided to accompany it with a simple baked potato. 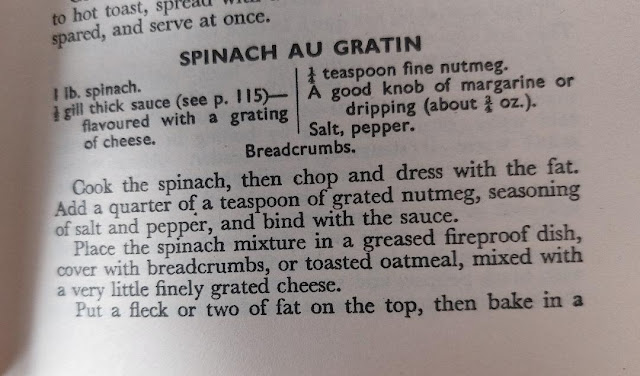 ... the last line over the page reads: 'moderate oven for about 20 minutes to crisp the top and blend the flavours well'.
They were all cooked at once in the oven to save on wartime/modern fuel costs, although I did zap the potato briefly in the microwave so that I didn't need to have the oven on for too long. 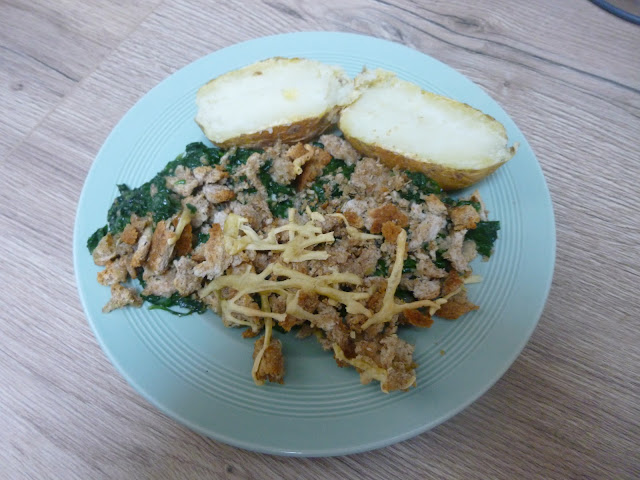 My tea was tasty and very filling, but somehow didn't quite sit right, I don't know how to improve on it really, perhaps some other vegetables mixed in with the spinach.  I will have another go at it with some tweaks though, as I could almost feel the mass of greens doing me good. 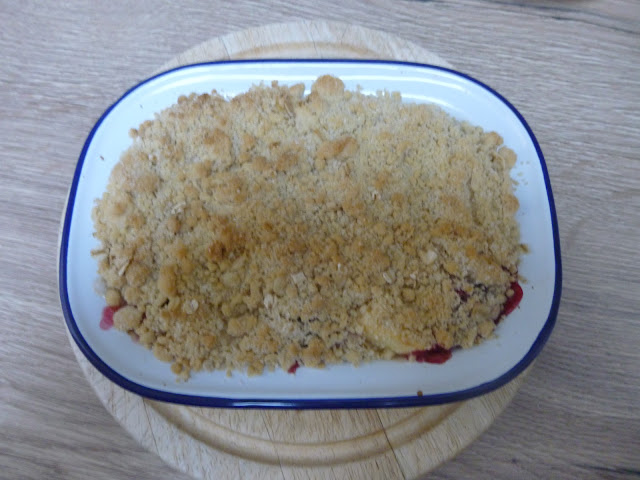 Oh, the large crumble turned out lovely, unfortunately I was too full to eat it, even later for supper. 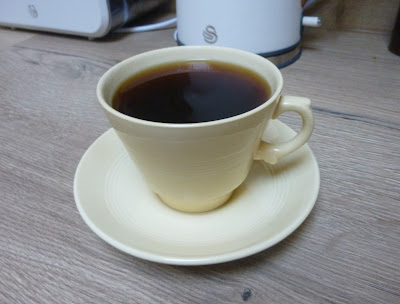