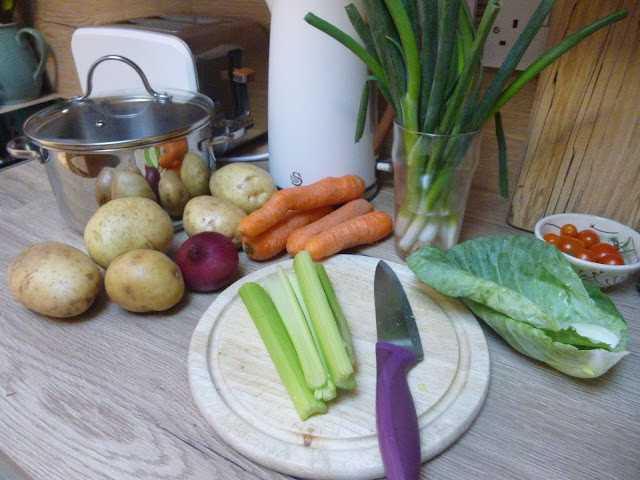 Day one of my modern wartime rationing started with a bowl of weetabix, well the equivalent sort from Aldi but I always call them weetabix ... with a little 'w'.  Somehow, I haven't got the photo, I could have sworn I took it but no, it's not on my camera or phone.  Oh well, I'm sure you can picture two little weetabix with a good splash of milk in a little green Beryl Wood's Ware bowl.
Soon after breakfast I started making my lunch and evening meal, as it was to be a bowl of vegetable soup and a Lord Woolton Pie the base was exactly the same ... vegetables. 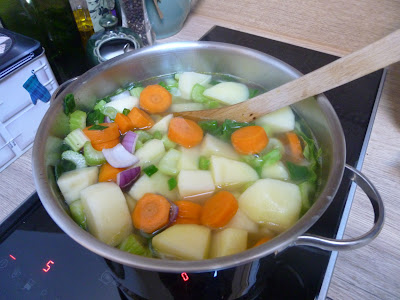 Before long everything was in the pan and simmering gently in a couple of pints of stock. 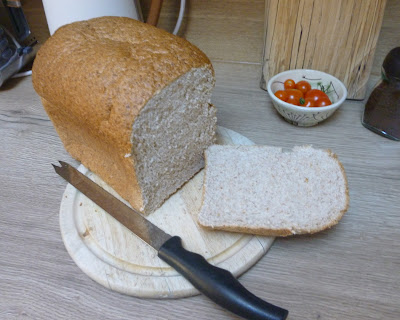 Time to get out the unsliced loaf that I bought the other day.
I purposefully bought it a little bit early as the good old National Loaf was always sold one day after it was made, so that it would be easy to slice with little wastage, and unlike modern bread it turned into a solid brick within twenty-four hours.
Oh, how lucky we are.  My more modern wholemeal loaf was still wonderfully soft and easy to slice. 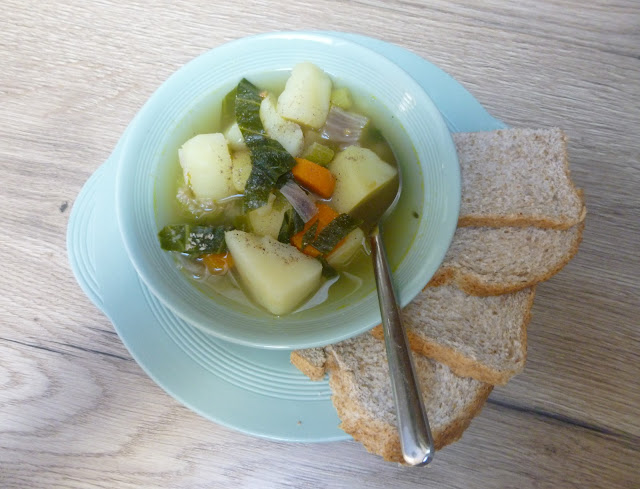 On the menu for lunch was Vegetable Soup and bread, but the vegetables looked so good that I decided to simply have them as they were.  It was delicious. 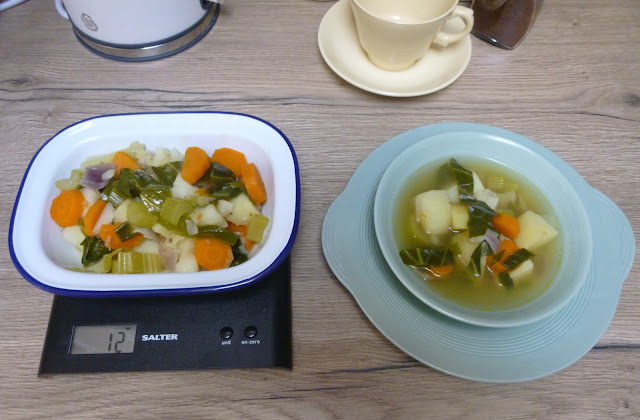 I put 12oz of the vegetable mix from the pan into my enamel dish and left it to cool ready to be topped later, then I whizzed up the rest with my stick blender to make a pan of soup for later in the week.  That's a few lunches sorted out then.  I think I have it twice more on this week's menu so some will be frozen for future use. 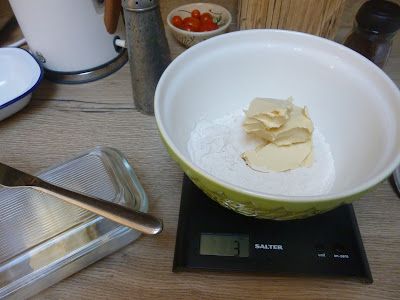 After lunch, I was either brave or mad ... I'll tell you which later in the week!!
I used half of my week's fat ration to make up some pastry and crumble mix.  I just did the usual half fat to flour ratio. 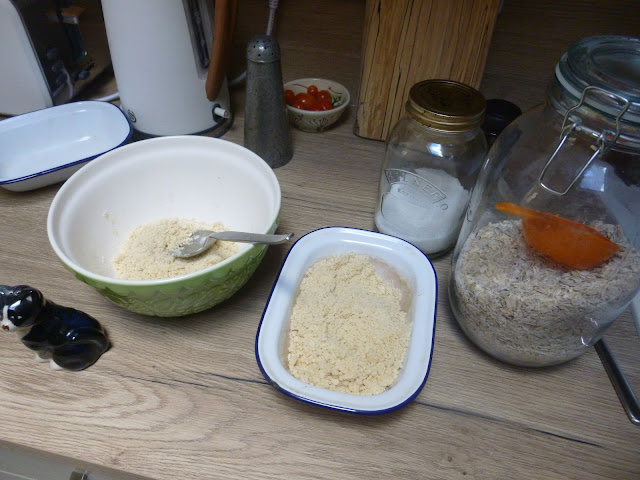 Then I split the rubbed-in mixture in half.
To one half I added some salt and water and made pastry, which went to rest in the fridge for a couple of hours.  The other half had an ounce of my sugar ration added to it and a spoonful or two of oats, this will be my crumble mix for on top of some of the apples and maybe a blackberry or two from the freezer. 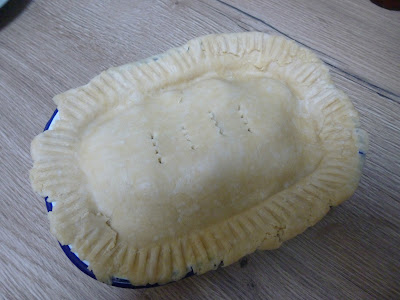 Once cooled the vegetables were topped with the rested rolled-out pastry, which I photographed just in case it all went horribly wrong in the oven!! 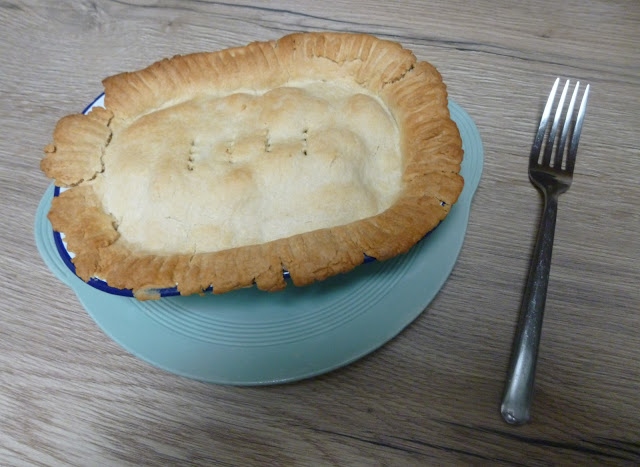 Lord Woolton Pie
But I needn't have worried it came out looking very presentable and it was delicious.  I should perhaps have had some gravy and cabbage with it as was my original plan, but I just fancied trying the pastry exactly as it was, and I wasn't really that hungry.
It was delicious. 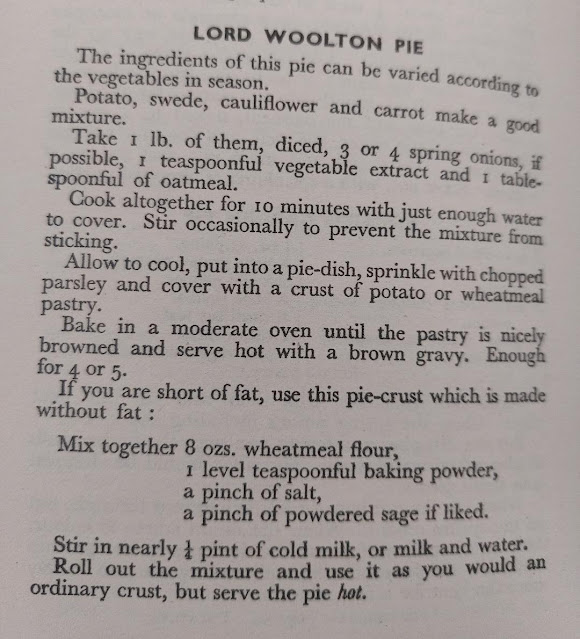 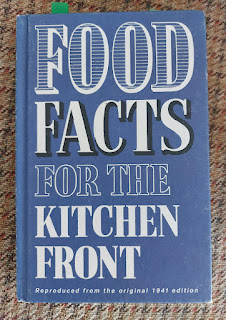 Taken from this book, but this recipe is also to be found in lots of other books, especially those written my Margeurite Patten.
So that was day one over, and I found it pretty satisfying to be honest.  I had to fight the urge to snack a few times, but a cup of coffee in my little Jasmine cup and saucer or a nice glass of cold water straight from the fridge and I was fine. 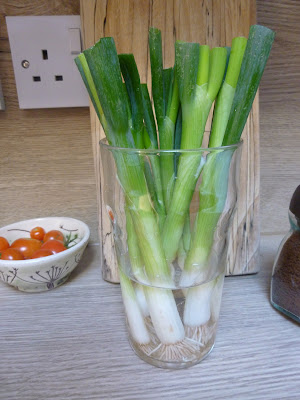 Oh, and now that the spring onions have had a good trim they fit on the shelf in the fridge. 😃
Sue xx
at September 30, 2022