Day Fourteen - Use it Up, and Enjoy ... and This Week's Giveaway Winner 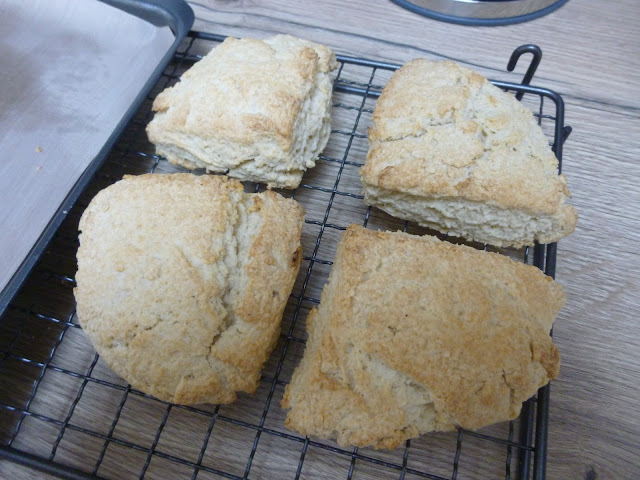 The last day of my second week of living on My Modern Wartime Rations.
I really like the last day of the week; it means I can use up some of the things that I might have been quite strict with myself over the week ... and this week I have been pretty careful with my butter.  So I decided a real treat of a breakfast was called for.
Scones.
However, you say it ... whether it rhymes with stone or gone ... they are delicious and a real wartime suitable recipe if you follow the one that I use.  The main ingredient is flour which was not rationed during the war years.
My Scone Recipe
8oz Flour
2oz butter or spread
1oz Sugar
and a pinch of salt
milk
Rub the butter into the flour, add the pinch of salt ... and if you want to you can add a few sultanas now ... I meant to do this as I have them in my points shopping for the week, but I forgot, it was breakfast time after all!!
Add just enough milk to bring the dry mixture together and lightly make it into a ball.  I just flattened this out with my hands and divided it into four quarters.  But you can cut out with a cutter if you are so inclined.  My way means less washing up and no re-rolling of bits 😁
Brush with milk and bake in a hot oven (220c/200fan, 425f and Gas 7) for around 20-25 minutes.
Leave to cool slightly, or as long as you can wait and then enjoy. 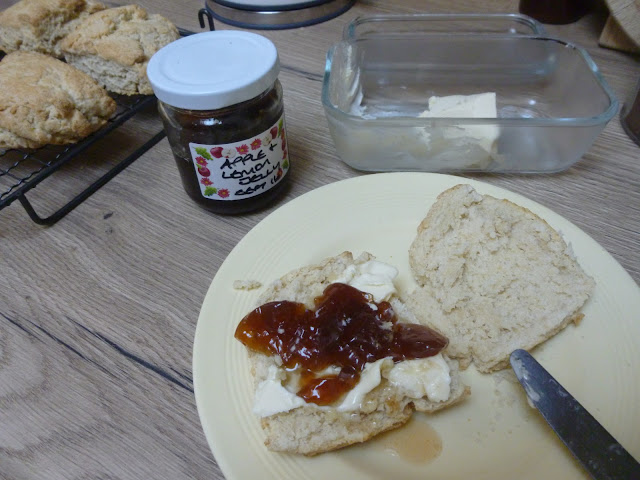 I went berserk and used up all my remaining fat ration.

And then took the remaining two scones to Alan for his elevenses before I got tempted to eat all four. 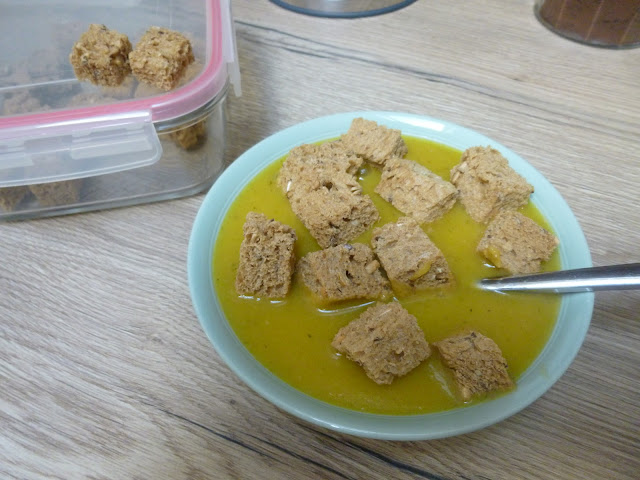 Lunch was one of the frozen soup portions and some of the croutons I made at the beginning of the week.  They were so dried out that they just floated.  I had to submerge them myself.  A really good success then, as being this dry they should be happy in the cupboard for quite a while.
The two croutons on the edge of the tub lid were treats for the dogs, who also agreed that they made a tasty nibble. 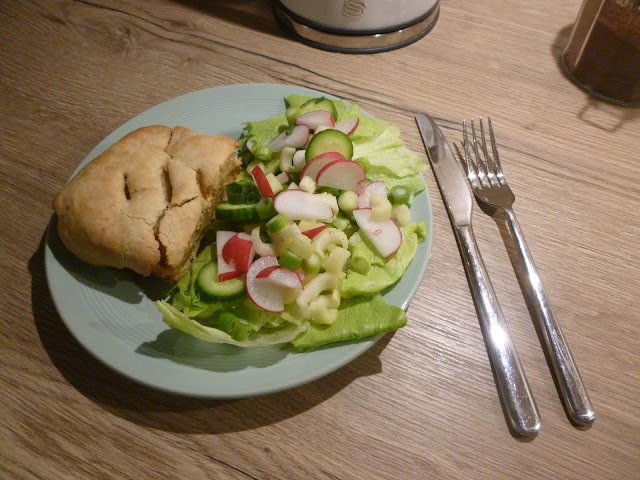 For tea it was the leftover pasty, served with a salad this time.

A very successful food day, with three tasty meals that I really enjoyed.  Maybe I didn't quite get all of my five-a-day but with the vegetable soup that was high in greens and a nice salad it wasn't too bad. 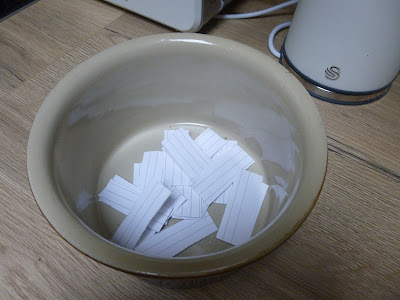 I decided to go all old-school for the giveaway draw this week as Google was playing up for lots of you and not letting you add your names to your comments, resulting in the occasional two comments for one request to be entered.
So, I wrote all the entrants names on pieces of paper, popped them into a pot, and asked Alan to pick a name out of it after a good rummage without looking ... 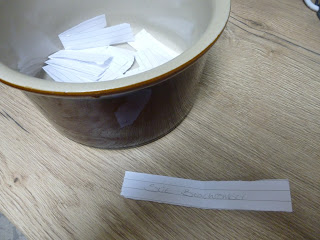 ... he picked out Sue - Beachcomber

If you can get in touch via the Contact Form at the bottom of the right-hand sidebar Sue, I will post off your little book as quickly as I can.

Thanks to everyone who entered and there will be another giveaway very soon.