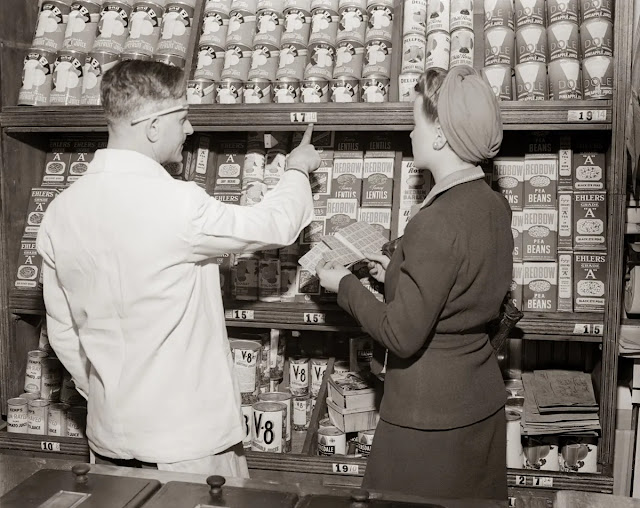 In December of 1941 the Points System of rationing was introduced to the UK.

Some goods were in very short supply and as such could not be added to the basic rations.  The Ministry of Foods would only add foods to the basic ration if it were absolutely sure that people would be able to get hold of these items each week.  So the points system came into being.

On top of their basic rations each person that held a ration book received points coupons.  These they could spend in any shop not just the one that they were registered with.

Points were allocated monthly and could be used at anytime during that month, they could not be carried forward.

Before launching this new system the Ministry of Food had put in place a 'Stop Sale' order on canned meats, fish and beans (the first items to be included in the scheme).  At the start of the points system they also released 30,000 tons of saved up foods to get the shopping with points scheme off to a good start. It was obviously a huge success as suddenly there were items on the shop shelves that people had not seen for weeks and to have points to spend on them must have been amazing.  And once again the shopper of the family had a little say in what they could buy.

Of course you still had to pay for the items, as similar to the basic rations the points system was designed to make things fair for everyone.  Even the wealthy only had a set amount of points to be able to buy their tins of salmon and stewed steak with alongside their cash.

The points value of items changed frequently as the supply and demand of items fluctuated, and also over the course of the war years the amount of points issued to each person changed between 16 and 24.  So with this in mind I will be taking the average of 20 points per month for my allowance.

It was obviously much easier for families with the points system as the points for each member could be pooled giving the shopper much more choice on what he or she could choose to buy.  A family of four people for instance would have 80 points for their shopping whereas a single person, just like me doing this challenge would just have the basic 20.

Foods and their Points Value per lb of weight

Thank goodness I don't eat these -

If and when I find out more points values I will add them to this list.

I am aware that there are many books on this subject, but strangely not a lot of mention of the points values, but I have checked the amounts that I am using in a few different places and if I find I have been too generous gosh I do hope not, or too strict I will alter the figures and provide the proof.