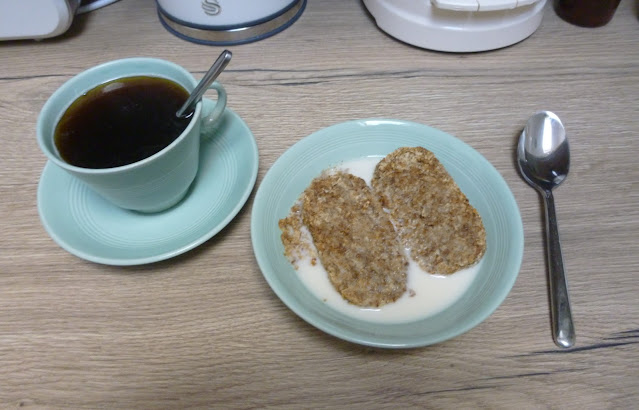 Breakfast for day nine was weetabix and a cup of coffee ... shortly followed by another cup of coffee.  It was just one of those days when double coffee-ing was the only way I was going to get through it. 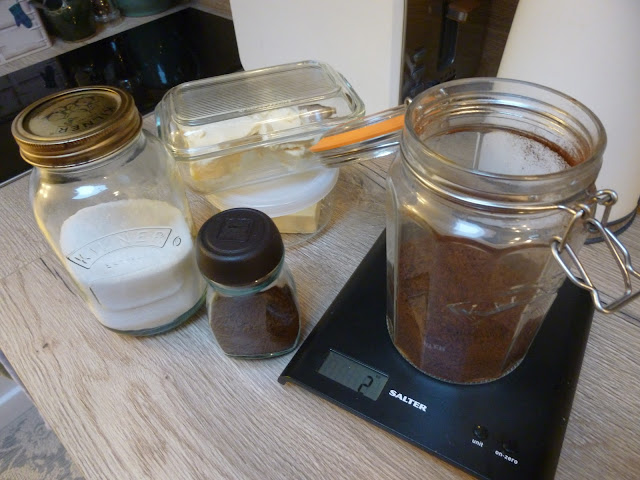 I only used one and a quarter ounce of my 2oz ration of coffee during week one, hence my large coffee jar appearing in this week's rations photos the other day.
I knew I wouldn't be able to fit this week's coffee into that little jar while it already had some in it, so I tipped out the contents of my usual countertop jar into a jug and then weighed it back into the jar.  There was a bit of a woo-woo spooky moment when it weighed in at exactly 2oz, but then I have had a few of those since rationing began. 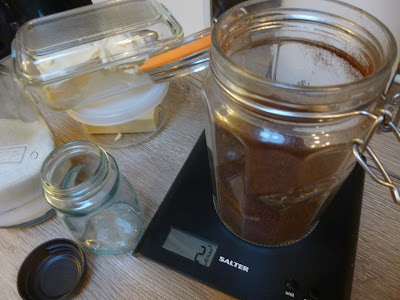 Then I emptied the little jar containing last week's leftovers into the big jar and that how I know I only used one and a quarter ounce of coffee last week.  It's a big relief that I am well under the necessary for my rations, and actually if I needed to, I could have more cups than I have been having.
A girl can never have too much coffee!! 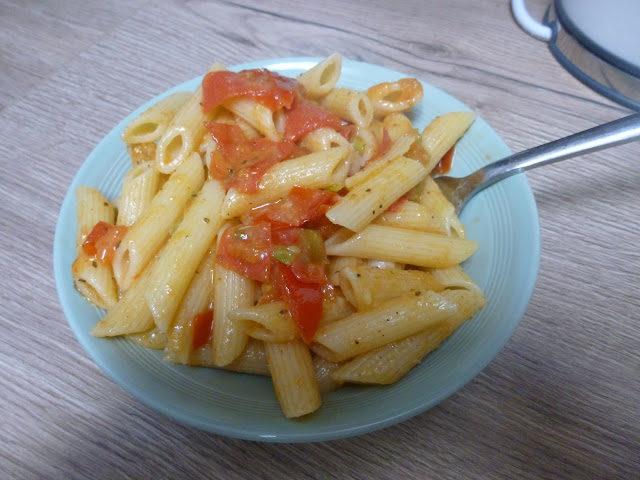 I was hungry by the time I looked at the clock and realised I hadn't had any lunch so instead of a sandwich I made what was supposed to be for my evening meal for lunch.
The pasta was soon cooked and while it did I sauteed one of my large tomatoes with the last two spring onions from last week's fresh shop.  With a dash of the pasta cooking water, it made for a very tasty, filling and simple tea.
I can't remember where I read it now, but in one of my books it said that although rare, pasta was available in the war years bought mostly from the little Italian grocers.  Now I don't have a little Italian grocer, but I do have a large stash of pasta in my cupboard ... and that is good enough for me.  🍝
Later for some supper I just had a slice of bread with some jam, I forgot to take a photo as Alan had just arrived home from his meeting, distracting me with his teasing of the dogs.
That's another day happily under my belt.  Tomorrow might be a bit more complicated though as Mum is coming out of hospital and we have to get to her bungalow in readiness for the transport bringing her home arriving, and to sort things out there for her.  But I'll see what I can do.
Sue xx
at October 08, 2022